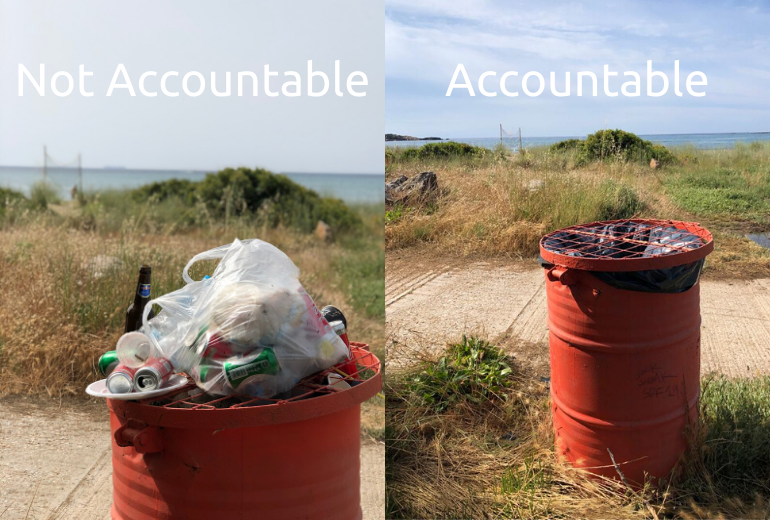 Considering today, June 5, is World Environment Day, we thought it would be a good time to share a story about accountability. People often tend to mistake accountability for responsibility; while they may seem identical when looked at superficially, there are actually important differences between the two. In order to better explain said differences, we would like to share a story with you—one with an environmentally conscious message in its core.

For the sake of this story, let’s analyse the case of an average—but accountable—Greek beach-goer; let’s call him George. After his day of sea-side lounging came to a conclusion, George gathered all the trash he had produced—a few glass bottles, some paper napkins, and the left-overs from the day’s meals—and made his way towards one of the beach’s many garbage cans.

These garbage cans are essentially large steel drums, with a lid that consists of a mesh of loosely packed metal bars. The bars are supposed to stop trash from being blown into the ocean by the high winds that are characteristic of the area—it is extremely clear that their effectiveness depends on trash being positioned underneath them.

Thus, when George reached the garbage can in question, he was greeted with a disheartening site. The drum was overflowing with garbage—this meant that several people were responsible enough to dispose of their waste at the appropriate place—but there was a large clump of trash stacked on-top of the metal bars. While the people thought to throw their waste at the designated spot, the slightest gust of wind would fling their efforts into the sea nearby. Here is where accountability comes into play.

A responsible person only sees the effects of his own actions—the people throwing away garbage without thinking about the long-term consequences. They only act within the influence of their own actions and often lack a sense of communal cohesion. On the other hand, an accountable person positions his actions within the context of the greater whole. Accountability calls for an individual to see beyond the sphere of his responsibility, and to approach a subject with a collective mindset at heart.

So how would an accountable individual deal with an overflowing garbage can? George knew that adding more waste on top would eventually cause it to tumble into the sea—he appraised his actions on a grander scale. The next logical step was to move to a less packed garbage can—that still left the problem of the existing overflowing trash. Thus, George picked up all the trash that was above limit and moved to the next garbage can; he felt accountable for the actions of others and couldn’t depart without altering the situation, even if it wasn’t technically his “responsibility”.

An accountable person thinks in terms of “why”. Why do I complete a certain action? His “why” stretches far beyond the consequences of now and considers the long-term chain of events. In the case of George, he considered his impact on the environment and on the community—his community. In contrast, a merely responsible individual positions his “why” within the short-term; he knows that dumping trash into the sea is inherently bad and goes for the next best solution—positioning his waste in a precarious spot, without caring about the future result. The responsible person does his part—and leaves it at that—while the accountable person does his part, while considering how it will affect others.

Accountability can offer a solution to many problems, if only we fully embrace it and let it into our lives. From increasing work efficiency to combating large-scale environmental pollution, thinking beyond your own responsibility can prove greatly beneficial for you and the people around you.

So next time you head out to dispose of some trash, and you encounter the dreaded overflowing dumpster, be accountable and take it somewhere more appropriate. Yes, this might consume some of your time, but preserving our environment makes it all worthwhile.

This website uses cookies to improve your experience while you navigate through the website. Out of these, the cookies that are categorized as necessary are stored on your browser as they are essential for the working of basic functionalities of the website. We also use third-party cookies that help us analyze and understand how you use this website. These cookies will be stored in your browser only with your consent. You also have the option to opt-out of these cookies. But opting out of some of these cookies may affect your browsing experience.
SAVE & ACCEPT